Follow the #whatshappeninginmyanmar and #justiceformyanmar hashtags on social media platforms.

This page is intended to be a resource for people outside of Myanmar who want to take action and spread awareness.

Number of Arrests and Deaths as of 3/21 (Source: AAPP) 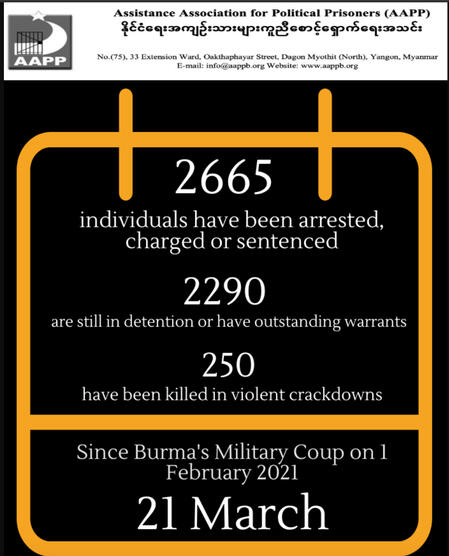 Some of the Lost Souls 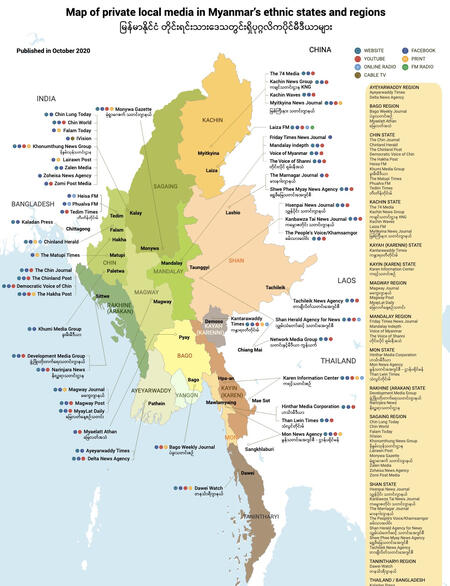 Write to State Senators (US)

“Hello. I am a (insert state) resident. I am calling to demand that Senator (Last Name) OR Senator (Last Name) co-sponsors the newly introduced bipartisan bill called S.Res.35: A resolution condemning the military coup that took place on February 1, 2021, in Burma and the Burmese military's detention of civilian leaders, calling for an immediate and unconditional release of all those detained and for those elected to serve in parliament to resume their duties without impediment, and for other purposes. On February 1, 2021, the Tatmadaw (military) of Myanmar staged a coup, detaining key leaders of the ruling National League for Democracy (NLD) party. This was immediately followed by the Tatmadaw censoring the press, shutting down the Internet, closing banks, cutting off global communication, and announcing a state of emergency. The country of Myanmar is in a humanitarian crisis, requiring immediate humanitarian intervention. In addition to the ethnic conflicts, civil servants across the country have decided to step down from their jobs, refusing to serve under military rule. This growing Civil Disobedience Movement, however, not only hurts civilians in need of service, but also causes great concerns about the future of the COVID-19 pandemic as the military halted its vaccination programs. As it stands, our Burmese brothers and sisters suffer in silence, unlawfully thrust under the rule of a dangerous dictatorship that opposes the will of the people. This is a human rights violation and a destruction to democracy. Please act urgently on this matter. Thank you!”

STAY UP TO DATE